The love conquest dynamic: initiative, dates and apps in Argentina

The analysis of cultural practices, such as the conquest of love, manifests certain typical traits which characterize time periods of our society. In this sense, when we speak of love and social relations we are also reflecting upon desire, fidelity, loneliness and established social roles, even about the impact of technology. Nowadays exists a certain nostalgia about other times where romantic bonds were not penetrated by technology. Thus we pose the question, in which aspects and how distinctively different were romantic relationships in the time of our parents?

In this article we look into one of the founding axes which structures and gives introduction to a possible love bond such as the dynamic of the love conquest among argentine people. For this purpose we included a set of questions in our January edition of Opibus, our online monthly survey which is nationally representative and covers wide public opinion themes. This allowed us to analyze three intimately linked questions: who takes the initiative when it comes to the moment of seduction, how is the division of expenses on the first date and who use dating apps such as Tinder, Badoo or Happn.

We will begin by the first step of seduction, the initiative. What do we do when we like someone? Even though when it comes to the dichotomy of “hitting on someone” or “being hit on” at a total level the majority chooses to be protagonists, the answers vary by sex and age of respondents. Almost 3 out of 4 males assert that at the moment of seduction they take the first step, while close to two thirds of women prefer to wait for the other person to initiate. In generational terms there are also differences: only among millennials we find the preferences almost split in the middle. Then at a later age it seems that there is more of a sense of protagonism when it comes to the love conquest.

Males and female who take the initiative by age:

That said, when analyzing the answers among male and female according to different generational segments you can see that taking the initiative has a fundamental strong male imprint. In other words, women, independently from their age prefer that the other person would take the first step in the seduction phase. (Graph 2).

First dates tend to have a moment, a very awkward one in some cases, when the check comes and one wonders: “should we split the bill, should I pay it all, should I be invited? According to our data, the main trend is to either pay or be invited; just 38% of respondents affirm that they split the check on a first date. Again here we can observe variances across different socio-demographics. Males in their majority declare to pay on the first date, while on the contrary 57% of women prefer to share the costs. Moreover, splitting the bill is more common in younger people, more so in millennial women from which 66% say that they divide the costs. Other important differentiation, as it is shown in Graph 3, is related to their socio-economic level. In the higher socioeconomic brackets only one fourth of respondents claim to share costs, figure that rises to 45% in the lower economic bands (D1 and D2).

There is an interesting data point that links the two indicators previously shown. Taking the initiative in a relationship is strongly linked to inviting and paying the first date, especially among males. Thus, the ones who initiate tend to also pay for the first date.

Lastly, we also asked people if they had ever dated someone that they have met through a dating app. What we saw is that getting to know people through these apps is a modest phenomenon, which encompasses 20% of the population, something more prevalent in males and young people. Nevertheless, even though millennials are renowned for their intensive use of technology, older generations are also adopting certain practices of the digital culture. As our data shows, 13% of baby boomers have met someone on a dating app in comparison to 24% of millennials.

The aspect that it is still marginal is the amount of actual romantic relationships that are formed through Tinder, Badoo o Happn, just 6% of our sample. This result is in tune with our principal findings in the second research study from the Observatory of Young Consumers, done by the University of Palermo and Opinaia in 2018. From those findings it is clear that a strong part of young people still prefer to meet “face to face” and that seduction is best conducted in person. 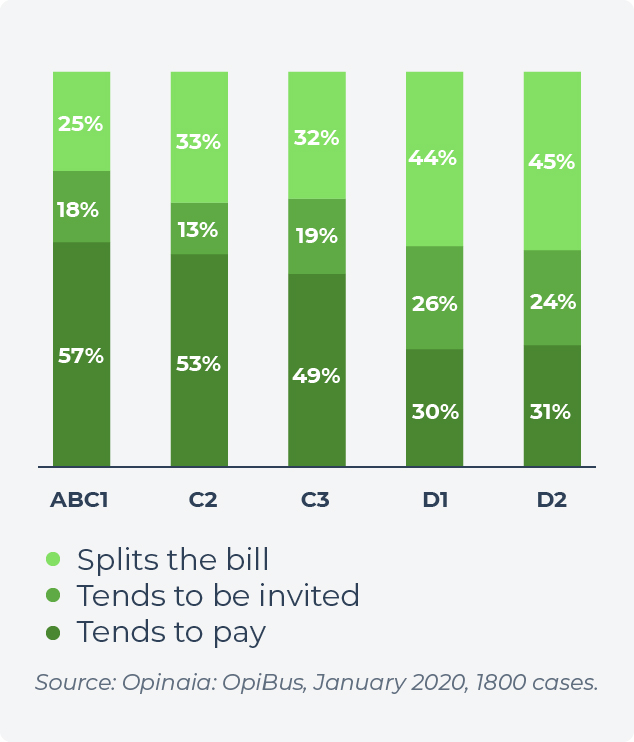 In sum, what do we know about the love conquest dynamics in Argentina today? Firstly, taking the initiative in a romantic relationship has a strong male imprint. Secondly, splitting the bill on first dates is a practice more common among women, millennials and lower socio-economic levels. Lastly, dating apps do still have a modest impact on the facilitation or conformation of romantic bonds.

Personally we find two results that strike us the most from this OpiBus edition. The first one is that taking the initiative is still predominantly conducted by males, in the same way that it has been done in previous times. However, it also stands out that the lower the age, the lower the amount of people that takes the first step, and that this trend –even in a lower level- it is depicted even among young males. While the first illustrates how certain things have kept the same through time, the second one pinpoints towards a change in attitude. What has stricken you the most from our study?

Don't miss out on our future research articles, follow us on social media: